skip to main | skip to sidebar

New freaky friday movie - but with a murderer? 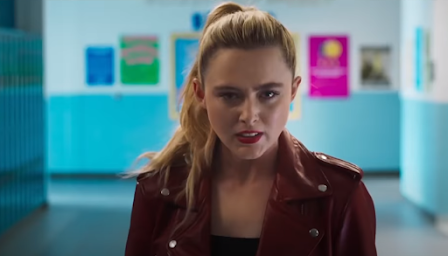 I've been holding off posting this.  So I stumbled upon this person's youtube channel a few months back.  According to the wikitubia, he dccided to dress up as a girl as a dare on his twitch gaming stream:

Well since then, he's done quote a lot of streams on twitch.. In a recent video, he made a pledge that if he got $10k in donations, he'd stay dressed as a girl for a week

Now obviously I'm not the first TG blogger to talk about F1NN5TER.  He really makes a cute girl, and you have to wonder what his motivation is.  I've tried to watch a few of his streams through, and he claims he has no intentions of transitioning.  He has "simp" goals, and for those that don't know what a SIMP is it's a dude that keeps buying a girl gifts and never gets anything in return.  It's almost as if he's turning it around and making everyone else a simp.  I'm subscribed now, and today's stream seemed quite lucrative.  His goal hovered around $800 for a while, then suddenly someone dropped a $2,000 donation and it wasn't long before he was above $3k.  Now keep in mind that's $3,300 for 2 hours of streaming (sure there was probably some prep to get dressed up, but lots of girls have to do that everyday). 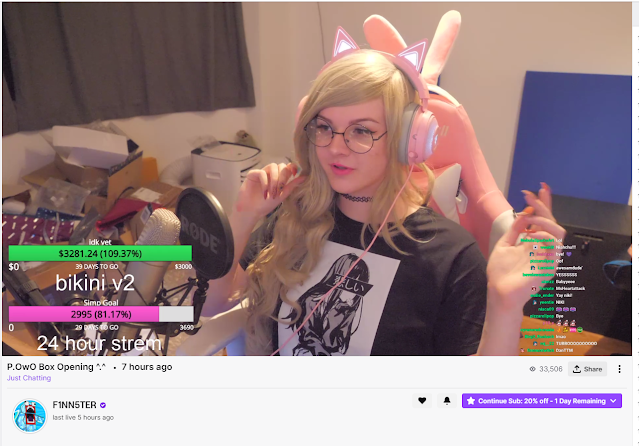 Beyond his funding (which I believe goes directly to him), he also gets SHIT-tons of gifts.  Most of his streams are simply opening packages of gifts sent to him.  It's mostly clothes, I'm pretty sure that cute pink bunny gaming chair was sent to him.  Then ABOVE that if you look at his viewers, it says 32k viewers.  If you don't know about twitch, those are REALLY good numbers.  I subscribe to some channels that have maybe 100-200 regular viewers that make an ok living from that (they usually get some mild donations too).  Whoever this kid really is, he's really smart (and will likely continue to make a good living).

I bought an oculus rift S

So I've been wanting to try modern VR for a while.  I remember playing that giant VR system at certain arcades in the early 90s (the one with dactyl nightmare that cost like $1/minute).  My biggest reservation initially was the high cost for an early system.  I think the first oculus was like $600, which also required quite a beefy computer.  Also the early system required external sensors.  When I heard about the latest S version with cameras built into the headset, effectively eliminating sensors (and lower $400 price) I started getting interested.  So this past week I finally pulled the trigger on a slightly used one.  I only saved $100 but I was concerned about whether this was going to be a keeper.

So why do I even bring VR up?  Well one program (which is free) is called VR chat.  Other than your home (which is basically a box on a cliff) there's not really any other programs where you can not only grab non-default avatars, but you can't really interact with anyone (unless you happen to make friends with someone, or have an IRL friend with VR and you invite them over).  Anyway, I'm not going to say the graphics of VR chat are mind blowing, however VR in general gives you an odd sense of realism.  Even when certain objects are blocky, the 3D hologram effect (and decent shading) makes it feel real.  And obviously with VR chat, you can pick avatars that are female.  Now I gotta say that when I was finally alone (I feel weird using VR around my wife, not to mention guilty.. but I'll get to that later), I really let my mind drift and pretend it was real (which can sometimes happen without trying).  Looking at a mirror and seeing my avatar mimick my arm and hand movements really makes you start believe it's really you.  You can look down and see your female body (though in VR chat the feet look odd buckled when you look down).  Finger movements are pretty limited by the default controllers.  You can basically point, open your hands, or give a thumbs up.  Also because there's no foot tracking, the system will sort of just make leg moving movements when you move around (or if you sit down, the helmet knows you sat down and your avatar will follow along).  Now there are of course better VR gloves, body trackers, but all of that can get pricey (plus if you don't have the space, it's sort of redundant because not like you can walk forever).  This is further limiting by the fact that I'm tethered by a cable.  Yes I could have gone with the oculus quest, but you're more limited by what you can run on that (speaking of which, the oculus quest 2 just got leaked today).  The new quest looks like it's got a super powerful cpu, and it has other chips optimized for VR (multiple cameras, 26 joint recognition without controllers).  It can also plug into a computer if you want to increase it's CPU power (so it can sort of be portable but also tethered headset).

There's another app I've been following even before I got VR called Sansar.  While the graphics are very good, it lacks mirrors.  I know this sounds like no big deal, but honestly seeing yourself in a virtual world is half the experience.  Really the only time you can see your avatar up close is when you're customizing it, and even then you're in a 3rd person view.

So what are the downsides to VR?  I would say the number one is that it's very anti-social.  The other night I spent like 2 hours in VR chat even though it felt like maybe a quarter of that time.  The real world really sort of fades away as you immerse yourself.  My wife wasn't mad, but she did make the comment "you sorta ditched me".  Another is that although the motion sickness isn't there, I do feel like my eyes get strained if I'm using it for more than an hour.  Even though it's LCD behind lenses (and it feels very comfortable while you're in it), after pulling off the headset it feels like you've been staring at a TV set from inches away.

Posted by tg_captioner at 9:13 PM No comments:

So I've been loving this series.  Basically it shows what super heroes would likely truly be if they existed, which is a bunch of a-holes that do whatever they want because who's going to stop them.  Anyway, towards the end of this 2nd season they bring back a character that died.. sorta.  Apparently there's a super hero that can mimic anyone, so of course he uses him to clone his girlfriend he killed.  It makes for a great scene